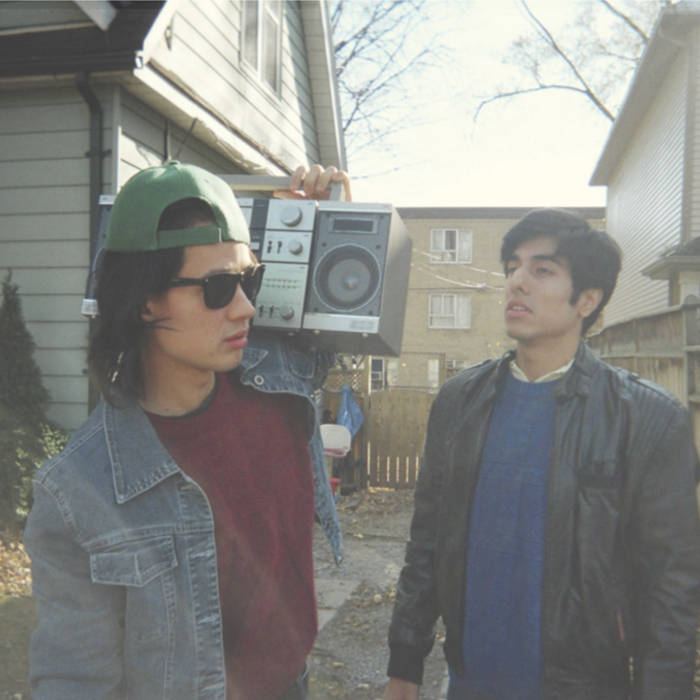 The story of Sphinxxx begins in Windsor, Ontario in 1985.
A mere 500 meters of water separate Canada from Detroit and both motor cities have felt the boom and ultimate bust of being so closely tied to the auto industry. Windsor was never affected in the same way as its neighbour and until recently, well paid auto jobs supported a large working class community.

In this setting two school friends, Sam Haddad and Justin Chauvin, were brought together by their love of New Wave and electronic music, or more to the point their disdain for the cock-rock theatrics of bands like Van Halen so adored by their classmates

Obsessed with The Electrifying Mojo a forward thinking Detroit radio jock (also credited as a huge influence on the Techno scene being pioneered in parallel across the border) they would flash their porch lights at midnight at the command of the baritone Mojo after hearing a selection of the latest tunes from Kraftwerk, The Eurythmics and Prince, beamed across the water from the ruined metropolis.

Sam's parents emigrated from Lebanon fleeing the civil war of the 1970s and settling in Windsor to make a better life for their young families. Despite a burgeoning Middle Eastern community, adjusting to life in the Canadian city was not easy and Sam suffered taunts about his accent and the strange contents of his packed lunch. Entering high school, his accent gone, Sam cultivated an interest in the classic rock his Anglo contemporaries seemed so excited about in an attempt to fit in.

A chance meeting with Justin whose family had recently moved to the same street changed all that. Justin had been tuning in to the Electrifying Mojo's Midnight Funk Association show for several years, a portable radio tucked under the covers, one ear tuned for the footfalls of his light sleeping, quick tempered father. Justin would be exhausted from these late night sessions at school the next day but brimming with excitement about the new Prince or Kool and The Gang tunes Mojo had played. Justin's excitement was infectious and soon Sam had traded Bon Jovi for the B52s.

Now 16, the duo would meet at a tree house hidden in a nearby provincial park to smoke weed, listen to and talk about music. A battery operated turntable with FM radio provided the soundtrack and a growing collection of shared vinyl vied for space in the clubhouse with the boys.

During the sweltering 1985 summer, many of these vinyl records were irreparably warped, to the horror of the pair who had spent every spare penny on these latest European imports. During an epic pot session these records were assessed to see which, if any, were salvageable. At this point something strange began to happen-the warped records became stuck in hypnotic grooves which the receptive duo would listen to for up to an hour at a time playing a percussion accompaniment on the wooden tree house floor.

It was Justin who bought the first keyboard, an already well out of date Lowrey model from a local pawn shop which became a new fixture at the tree house, providing simple electronic chords to accompany these warped Lp loops. Before long, the pair began talking in earnest about "the band" and had a successful future mapped out well before ever composing a note.

Mojo who sometimes filled whole hours of airtime playing classical music had shown the group that anything went as far as music was concerned and Sam, who had initially done all he could to shake his Lebanese heritage was actually the one who brought this influence to the fledgling group, the element which ultimately resulted in a new genre of music. This was a fusion of 80s dance music and ambient with Middle Eastern melodies-What has become known as Shisha.

Ransacking his parents’ vinyl collection for classics such as Lebanese diva Fairuz and other Arabic luminaries like Abdul Halim Hafez, Sam advanced the warped record concept making more intentional tape loops from vinyl. He did this at Assumption College School's music room, under the guidance of music teacher Stan Smedley who himself had a background in Musique Concrete.

These haunting minor key vocal loops provided the basis for most of the still nameless bands fledgling efforts as they experimented with building their own home grown electronic music-their ultimate goal to have their music played on Mojo's radio show alongside their musical idols.

The duo, now rebranded as Sphinxxx, spent much of 1986 working on what would become their only release-a self titled six song cassette complete with the illustration of a Sphinx in sunglasses playing the keyboard, drawn by Chauvin.

A collection of forward thinking electronic dance music and more ambient efforts with distinct Middle Eastern melodies, the duo had progressed enormously since their days of beating percussion on the tree house floor, ultimately creating an entirely new musical sound that would reverberate across the globe.

A cassette tape was dropped off at WJLB, Mojo's head quarter's complete with a fictional return address from Germany, the thinking being that Mojo would be much more likely to play something European rather than something from just across the bridge.

Incredibly, on November 12th 1986, Mojo closed his show by playing "Eye 2 Eye" by "a new group from Germany called Sphinxxx"

The ecstatic pair couldn't believed their luck and were sure that world domination was just around the corner. Justin and Sam would have quit school altogether to pursue music full time if not for the unspoken certainty that their parents would never allow this.


With occasional Mojo play of "Hey Girl’ a devastatingly bass heavy groove, and a growing fan base digging this weird "..group from Germany" the band returned to the school's music room to work on a follow up to their self titled effort, less sample based but still using their signature Middle Eastern minor key melodies. The plan was to come clean and reveal their true identities as local heroes with the release of this second release.

Tragically Sam Haddad was killed in a car accident in February 1987 when his car skidded off an icy road and into a tree. Devastated, Justin was unable to do much of anything for several months, and when he finally returned to the tapes he soon realized that he would be unable to complete them without Sam's crucial involvement.

Several years later in 1989, as the Rave movement was taking off in the UK, Acid House pioneer Dr Brain had a multi platinum hit with "Medina" a 6 minute squelching synth work out which bore a striking resemblance to Sphinxxx' "Eye 2 Eye".

Working menial jobs after graduation, Chauvin never had money to take on a record company the size of Warner and he was continually taunted by the constant local radio play of Dr Brain's rip-off. Brain and several other label mates followed up with more rave and radio hits with very Sphinxxx like melodies. These in turn were aped from New York to Berlin and this Middle Eastern tinged electronic music took on the moniker "Shisha" after the label that many of these pastiche releases were housed on.


Though Sphinxxx are certainly not a household name, they have been sited as influences by artists like Radiohead, Madlib and Massive Attack. Their original cassette tapes have recently sold for over $500 and there are plans afoot for a vinyl reissue.
There is finally recognition of the legacy of this pioneering group and their very Canadian contribution to electronic music.

Justin who still dabbles in music has remained in Windsor where he manages a fast food restaurant. He sums up by saying "Even though most people still think Sphinxxx were a German group, I'm really proud of what we did. Sammi was a genius and what he did lives on in so many different forms in music today, I'm just glad I got to be a part of that."

Bandcamp Daily  your guide to the world of Bandcamp

Cannibal Corpse's George "Corpsegrinder" Fisher stops by for an interview